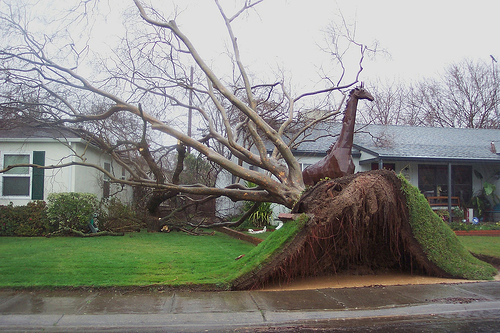 Trees are often a central topic when it comes to discussions of global warming or climate change, but what role do they really play and how important are they? Here are three different recent articles on trees that span the debate:

Fine for Burning Down Eden’s Forests: 11 Cents: When Madagascar drifted away from Africa some 165 million years ago, wildlife on the island spun off on its own unique evolutionary path, producing the world’s only lemurs, as well as dozens of amphibian and bird species found nowhere else on earth. That unique wildlife, which was only discovered by humans 2,000 years ago, has prompted many to refer to the island as an Eden-like remnant of the natural world as it was before human contact.

Trees Are Not The Answer To Climate Change: What was once seen as the solution to all our CO2 problems, the ability of trees to soak up anthropogenic carbon dioxide, has itself been hindered by global warming. A 20-year analysis of 30 sites in the frozen north has discovered that trees ability to take in CO2 is weakening. Whereas once it was assumed that just by planting more trees we could slow down the climate change tide. These results tell us unquestionably that we need to stop passing the buck, and stop creating CO2.

Trees absorbing less CO2 as world warms, study finds: The ability of forests to soak up man-made carbon dioxide is weakening, according to an analysis of two decades of data from more than 30 sites in the frozen north. The finding published today is crucial, because it means that more of the CO2 we release will end up affecting the climate in the atmosphere rather than being safely locked away in trees or soil.