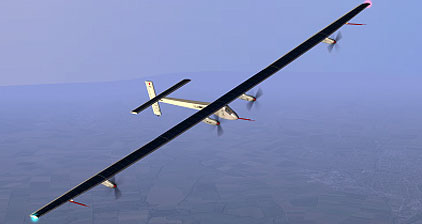 Electric scooters are something we’ve come to expect, just like hybrid cars and electric buses, but what about a solar airplane? Yes, the jokes about cloudy days in the sky will no doubt abound, but the endeavor is entirely serious. From concept to construction, the Solar Impulse has been hailed as a savior—the first major attempt to fly a plane without fuel, with eco-eyes set on a sun-powered trip around the globe. And for record-setting adventurer Bertrand Piccard Monday’s unveiling of its prototype was a long time coming: He showed off a mock-up of the Solar Impulse at the 2005 Paris Airshow, but now the 201-ft. plane is set for a test flight next fall. What’s next, a wind-powered submarine?