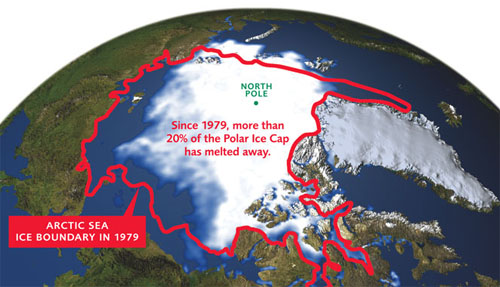 So a lot of people question the mechanism, cause or even existence of what is now commonly called climate change. Sometimes they call out the words ‘global warming’ and then point out that there is cooling going on as well in the world. Well, details and titles aside you can’t argue with melting ice caps, can you? Nature may have its cycles but this is unquestionably unusual and incredibly significant to the global climate.

Ominous Arctic Melts Worry Experts: An already relentless melting of the Arctic greatly accelerated this summer, a warning sign that some scientists worry could mean global warming has passed an ominous tipping point. One even speculated that summer sea ice would be gone in five years.

Why Isn’t Antarctica Melting? Antarctic sea ice hasn’t shown the same obvious melting patterns in recent decades as the Arctic, fueling the global warming denialist crowd. Though the data isn’t as consistent as in the North, where the extent of sea ice this summer hit a stunning record low, southern sea ice has been expanding.

22 thoughts on “How Can You Question Climate Change Now?”