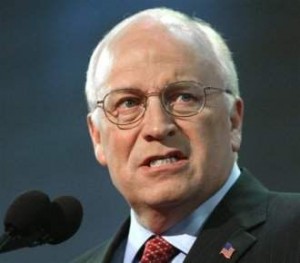 As if the Bush Administration was not already the worst Presidency in the history of the United States of America.

As if Dick Cheney didn’t already have a reputation for being a maniacal puppeteer.

Now, new statements by Jason Barnett, the former associate deputy administrator of the Environmental Protection Agency have revealed that Vice President Cheney’s office sought to delete testimony by the CDC in congressional hearings last fall.  Cheney’s people specifically asked for the removal of data in congressional testimony which proves the negative health consequences for human beings as a result of climate change.  At stake is pan-industry regulation by the EPA under the federal Clean Air Act.

And we know what that means, don’t we?  *gasp*  Big businesses would have to make costly changes to ensure they aren’t spewing pollutants into the air and making innocent people sick!  Good thing they have the Vice President looking out for their interests.  If only we, the people, had the same benefit.

Obviously the Bush administration is claiming that the revisions (a full 6 out of 14 pages deleted) were “routine”.  I don’t know if that is supposed to reassure voters, or warn us that the administration routinely tries to pull the wool over our eyes.

If our understanding of broad relationships between climate and disease is realistic, then climate change may already be affecting human health.

They list several health issues tied to global warming, including:

So many people are “waiting out” the Bush administration, which thankfully, is quickly running out of time.  But I have a feeling that we’ll be feeling the effects of the dishonesty, greed, and extortion of this administration for years to come.  Especially, it seems, when it comes to our environment.