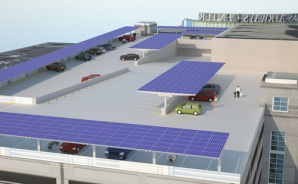 The US Airways Center will be the latest venue to benefit from alternative power, as the Phoenix Suns have announced plans to utilize solar panels, one of only a few professional sports organizations to currently do so.

Enough energy will be provided from the panels to reduce energy usage by roughly 26 home games, says Suns General Manager Steve Kerr. In other words, it will be as if 26 Suns basketball games never occurred at the US Airways Center, which means a big improvement on power consumption. Also, 440,000 pounds of carbon dioxide are expected to be eliminated each year. A total of 1,100 panels at 194 kilowatts on the parking garage’s fifth level will make this feat possible, providing a green mentality that celebrated Canadian and Suns point guard Steve Nash can get behind. Nash has long been a big proponent for eco-friendly sports venues  and green initiatives as a whole, so the star should be pleased with his team’s efforts, which are likely to be expanded to include the use of green cleaning products by the maintenance crew, and more. Nash is even apparently installing solar panels at his home – perhaps we should call him Apollo Nash? 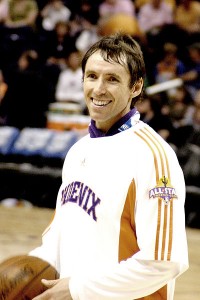 The new installation will run the Suns about $1.5 million, but the Arizona Public Service Co. will rebate the team $60,000 to $85,000 each year as part of their commendable renewable energy incentive program. However, the Suns won’t be ponying up cash themselves any time soon, and fans won’t be seeing an increase in ticket prices, concession costs or anything similar to make up the difference. Instead, the organization is teaming up with Tioga Energy, who will conduct panel maintenance for the next 20 years in return for an annual fee paid by the Suns that is contingent on the amount of solar energy produced.

All in all, it seems like a win-win situation for both parties as well as the environment. And hey, doesn’t it all just make sense for the Phoenix Suns? Surely there can be some additional beneficial publicity arising from this, too, given the team name.

For the record, the Suns aren’t the first to get in on the eco-friendly action. The San Francisco Giants were the first baseball team to use solar power, installing 590 panels at AT&T park back in March 2007. The Boston Red Sox and Colorado Rockies have followed suit since, at Fenway Park and Coors Field, respectively. In August of this year, it was announced that the Staples Center, which houses the Los Angeles Lakers, would receive their own collection of 1,700 solar panels.

5 thoughts on “Suns Turn to Namesake for Power”