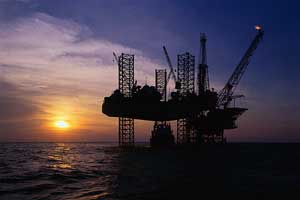 You may well be wondering – why the heck is Nancy Pelosi pushing through a bill that allows for offshore drilling? Isn’t that against everything we’re supposed to stand for? Is this another example of business-as-usual betraying core Democratic principles?

Where’s the fire? Why rush it through now?

The offshore drilling ban, in place now for decades, has a “sunset provision”. It has to be renewed every few years.

Unless a bill is passed, the ban expires on September 30. At which point… Bush could immediately hand out leases anywhere he wants to.

What’s in the bill?

As it now stands, the bill (technically, it’s House Resolution 1433,Louise Slaughter’s Comprehensive American Energy Security and Consumer Protection Act), keeps some limits: no drilling within 100 miles of shore (50 miles in some areas). And it works in a bunch of good things:

Is this a good compromise?

Maybe. It might get a few things done that wouldn’t have happened otherwise. And we have to get something passed, or we’re stuck with drilling, regardless.

The Senate has a completely different bill under consideration, a bi-partisan compromise measure proposed by a “Gang of 20” which just happens to include the Republicans up for re-election this year who are considered most endangered – New Hampshire’s John Sunnunu, North Carolina’s Elizabeth Dole, Maine’s Susan Collins, Minnesota’s Norm Coleman and Oregon’s Gord Smith.

The two houses will have to hash our their differences, bring together a compromise bill, and then… Bush has threatened to veto it.

So wait – this isn’t actually going to become law?

Not likely. Again, the drilling ban expires in two weeks… which is what the Republicans want.

So what’s actually going on here?

The Repubs can go back to their moderate-to-liberal constitutents in Oregon, Maine and New Hampshire and say, “Look, I care about the environment!”

Pelosi and Reid can say “Look, we tried the bipartisan compromise that everyone in the damn media has been claiming we should be doing – and Bush vetoed it. So much for bipartisanship!”

Hopefully President Obama can do damage control after he takes office in January. Along with damage control on Iraq, Wall Street, infrastructure, health care, employment… well, you get the picture.