Yes, even the immigration problem is fueled by cheap corn.

Simon Donner of the University of British Columbia has put together a great graphic on what happens to all the heavily-subsidized corn the US produces every year (via Ezra Klein). 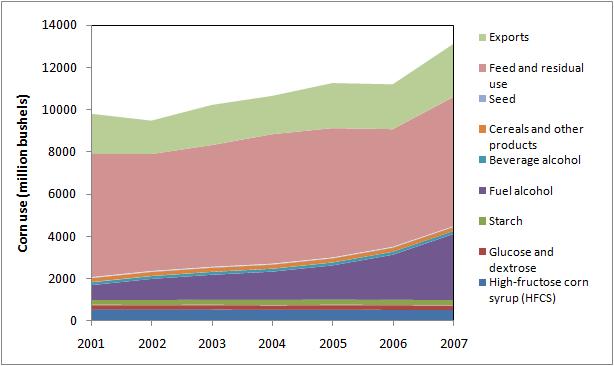 As you can see, it’s not about Corn Flakes. The stuff you eat (“Cereals and other products”) barely shows. Keep that in mind as you ponder our farm policy, and the farm subsidy choices being made in Washington.

The graph… shows the end use of US corn over the past six years (all data that follows is from the Foreign Agriculture Service and the Economic Research Service of the USDA). The big pink block in the middle is domestic feed use (~60%, down to 47% last year). The top category is exports, most of which is also used as feed (19%). The dreaded high-fructose corn syrup has been around 7% (5% last year) of the corn crop, glucose / dextrose around 2-3%, beverage alcohol (yep, there’s corn in that Bud Light) around 1-2%. Cereals and other foods? 2%.

The one area of growth (in blue) is fuel alcohol, or ethanol. Last year, 24% of all US corn production (29% of non-export corn) was used for ethanol.

We’ve known for years now that ethanol makes no economic sense, but we’re dumping a quarter of our corn crop into it.

Ethanol is just the latest in a string of boondoggles.

Next, we’ll see how King Corn has left thousands of Americans living next to lakes of poo, driven tens of thousands of farmers off the land, and left millions of us with clogged arteries from questionable beef.