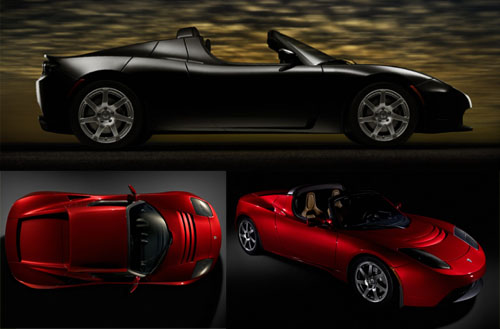 Want to green your ride, but can’t afford a Tesla? That’s okay… there are plenty of cool (if not quite so flashy) new transportation options coming down the pike that will cost you less than $100,000. Some of ‘em you can even build yourself.

Who needs hydrogen? Some energy alternatives have been around for years, and are making a comeback.

It’s not talked about as much as the Manhattan Project, but there was a big energy crisis during WWII, when the military sucked up a huge portion of the world’s petroleum output. Individual car-owners across Europe converted their cars and trucks to run on… wood. 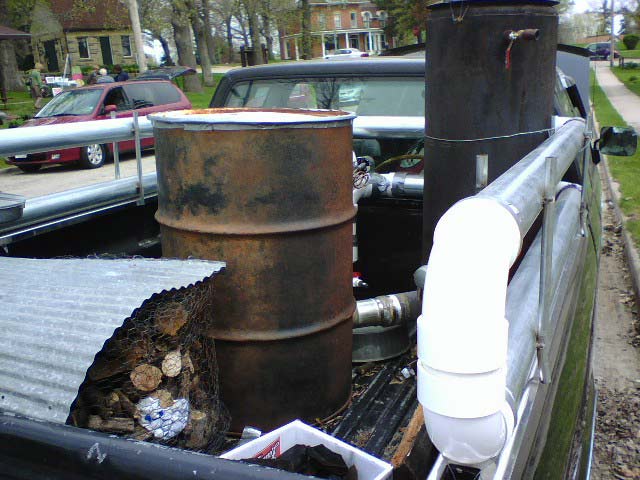 Wood. Engines don’t run on liquid gasoline – they literally run on fumes. Same goes for the fire in your fireplace – when you see flames rising, that’s the fumes of volatiles coming off the logs and igniting. You can do the same thing in your car.

Some folks are working on making this high-tech, with scrubbers and sealed, carefully controlled burners. Renewable Energy Systems are currently running a demonstration coast-to-coast tour with a couple of modded 1991 Dodge Dakota V8 pickups.

But for now you can go very low-tech – plonk a stove on the back of your pickup and run a vacuum hose to the carburetor; after that your spark plugs ignite the fumes as per usual. You can get information on the web to rig your vehicle with a hundred or so dollars in parts: Jim Mason offers workshops and info, or order a how-to guide from Mother Earth News.

But either way, your fuel can be wood if you want – or any scrap biomass.

The British Steam Car looks like the Batmobile and runs like an iron horse. It is not quite road-ready just yet, though, as it guzzles 1,000 litres (one ton!) of water per 25 minutes of travel time. So for now it is recommended only for shorter commutes (or perhaps not at all).

HumanCar is driven by people – even the steering is human powered, like on a bicycle or motorcycle.

How does it work? They’re being very, very cagey – there’s lot of talk on their website about patents and proprietary trade secrets, not too much on how it will run.

But for sure, this won’t be a Flintstones-style feet-through-the-floor operation.

Already on the Market: 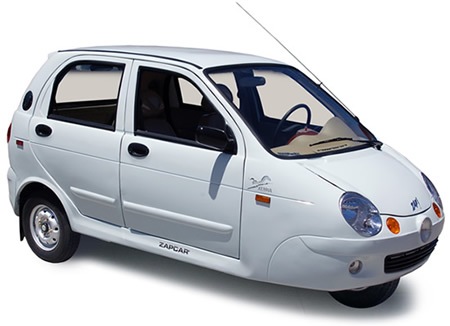 Perfect for in-city commuting or shopping, this little car only has a 25-mile range. Still, it brags that even after counting emissions from generating the electricity it uses, it produces 98% less pollution than a gas vehicle. And it’s available now. Next up: A ZAP trucklet with a solar panel to fuel itself. 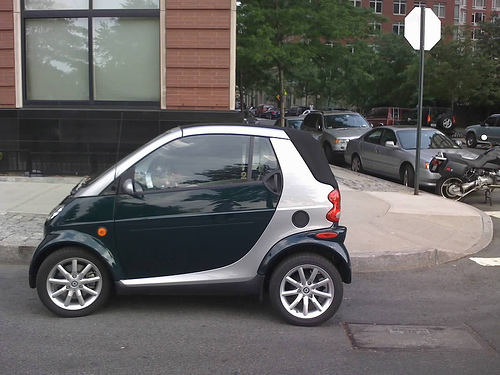 This may look like a toy, but it pumps out 110 horsepower (between a 4-cylinder gas engine and a 50-kilowatt electric motor) And it is kind of cute. This vehicle seats two comfortably (depending on the individual, of course); at a stretch you can cram in thirteen contortionists. 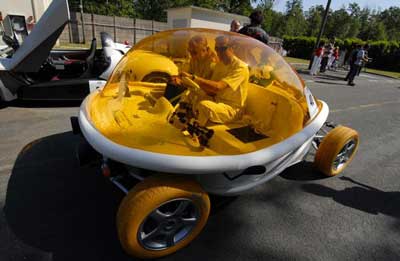 This little electric flitter can travel at up to 120 mph (although that prospect raises the specter of “Unsafe at Any Speed”). The Zoop is more about being seen – hence the clear canopy and the flashy design by EV-proponents André and Coqueline Courrèges of Paris-based fashion house Maison de Courrèges. 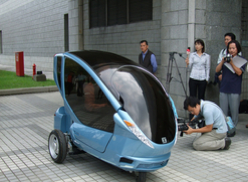 It is hard to say whether this Chinese offering is even a car, and even the name implies it is some sort of scooter…

Still, it has four wheels (in a diamond layout, rather than the standard “four corners” formation) and there is a roof over your head to keep out the wind and rain, so perhaps it qualifies.

The way it parks is particularly interesting – thanks to the diamond wheelbase, you can do some remarkably tight turning with this little thing: 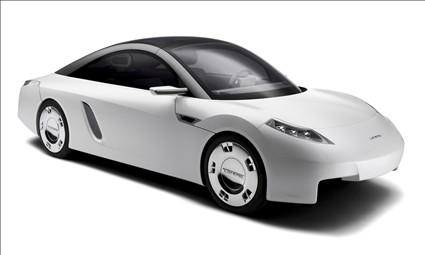 The name stands for “Low Resistance Mobile” This just goes to show that you don’t need to wait for next decade’s technology to accomplish amazing things with milage: The Loremo combines a highly-efficient German-engineered diesel engine with extremely low-drag design to achieve 150 miles per gallon. Coming next year to Europe, with US launch to follow. 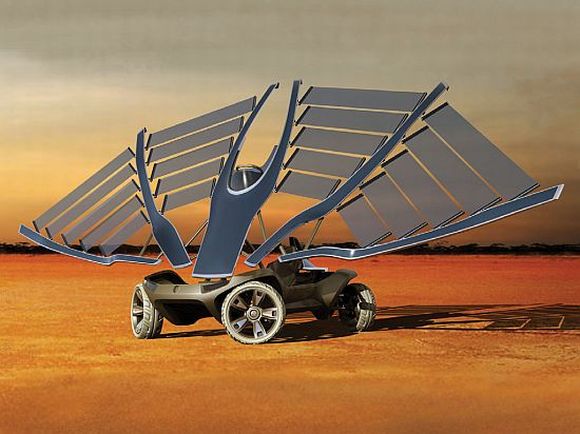 Want to really get off the grid? Helios has the answer: a solar-powered buggy with a saurian solar sail that spreads out to soak up the sun and recharge, photovoltaicly. This concept car won the Best Use of Technology at the Interior Motives Design Awards 2008. Note to racers: do NOT attempt to deploy the sail as a drag chute…

Coming as early as spring 2009 from MDI and Zero Pollution Motors, it runs on compressed air. Developed by Formula One engineer Guy Nègre, the Air Car is expected to make big inroads in India, where it will be sold as the Tata Nano for $2500. 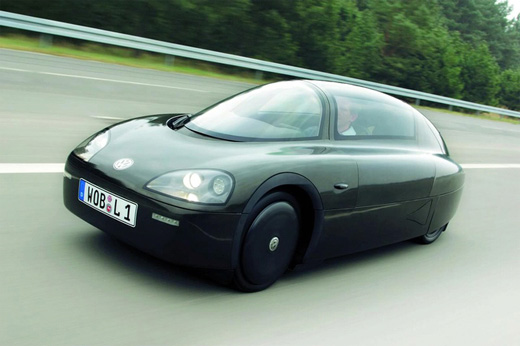 A few of the mainline automakers are trying to break out of the gas-guzzler mode (although not GM, who have announced they won’t be bringing their min-cars to the US market, further demonstrating their brilliant business acumen and why the government should give them a big bailout.) VW wanted a car that would go 100 miles on one liter of gas, but it’s taken them more than six years to perfect the high-tech low-weight materials like carbon fiber and titanium. Along with a super-sleek aerodynamic shell, this diesel-powered commuter car is scheduled to get a spectacular 235 mpg when it hits the roads (in a limited edition test release) in 2010.

Can’t wait – or really want to do something now? Don’t despair – you can upgrade your current rustbucket to at least make it a little more fuel-efficient.