How eco-friendly can a cell phone be?

A green cell phone – could there really be such a thing? Nearly 90% of the world has access to cellular phone service; there are nearly 3 billion mobile phone accounts in the world; and a number of countries have more cell phones in active use than their total population. Cell phones have become such an environmental concern that many areas have banned traditional disposal methods, requiring recycling and refurbishing instead, and regulations on manufacturing are becoming just as common.

What are manufacturers doing to make their cell phones greener?

With recycled aluminum cans plastic bottles making up the casing, and keys made from car tires, the Nokia Remade hasn’t eliminated the toxins within but there’s absolutely nothing new on the outside of this cell phone. The Remade is also designed with an energy saving feature to add to it’s eco-friendliness. The downside – the Nokia Remade is just a concept phone and a working prototype hasn’t yet been completed.

Nokia is full of green ideas – this is another concept for a futuristic green cell phone that senses your health and your surroundings. The solar carrying strap will power the wearable sensor and the phone would offer personalized services to monitor the weather, the users health, or the local environment. Biomaterials and recycled components are proposed for the manufacturing of the extreme eco concept. 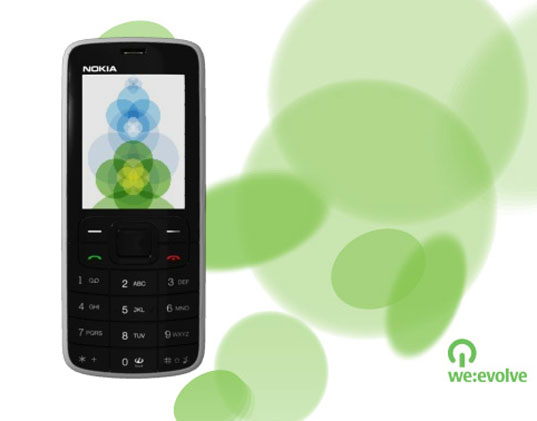 As long as you’re in Europe, this green cell phone by Nokia is more than a concept. The Nokia Evolve includes Nokia’s most efficient charger, using 94% less power than a typical Energy Star compliant product. The casing is made of biomaterials, half of the materials are from renewable sources, and 85% of the phone’s components can be recycled or reused after the phone is discarded.

The W510 is the first mobile phone in Samsung’s eco-friendly lineup. The casing incorporates bioplastics made from corn and was manufactured without the use of heavy metals typically found in cell phones (lead, mercury, cadmium, etc.). The F268 is Samsung’s first attempt to create phones that are free of BFRs and PVC – Samsung plans to make all their handsets and accessories chemical-free within the next 2 years. The F268 features a charging alarm to remind users to unplug when the phone is completely charged and both handsets are available in China.

The E200 Eco by Samsung is currently available to the European market. Unlike the partial use of bioplastics in the W510 above, the Samsung Eco is completely corny – the first Samsung handset with a casing made completely of biomaterials. Like the F268, the E200 is made without BFRs and comes in recycled, uncoated packaging.

The latest green cell phone release from Samsung is available in Italy and the UK and will be available in other European markets as well. The Samsung Tobi, designed for preteens, includes an assortment of safety features and boasts a bioplastic casing. Nontoxic, allergen-free paints are used for the bright, vivid color options and the ear piece is free of PVC to increase safety.

Sony Ericsson topped the list for green cell phones in a 2007 study by Greenpeace and led the PDA category as well. The T650i scored higher than phones submitted by Samsung, LG, Motorola, and Nokia because of its energy efficient charger and lack of PVC. It looks like Samsung and Nokia have beat Sony Ericsson to the green line – but the Greenheart concept is a start. The Greenheart features a recyclable bioplastic casing, a digital rather than paper owner’s manual, recycled packaging, and a charger that turns itself off after charging.

Greenpeace wasn’t too nice in their review of the original iPhone, resulting in a lawsuit by the Center for Environmental Health.  High levels of BFRs and PVC were found in half of the phone’s components, although it was noted that the iPhone contained no cadmium or mercury and low amounts of chromium and lead.  Has the iPhone 3G scored any better?  Not really, but the amounts of dangerous toxins are at least lower – and the packaging is receclyed.  Green accessories for the iPhone score much higher, like the magnet powered iYo charger above.

There’s been no updates on Motorola’s solar powered cell phone, although a patent was filed for the LCD ray-capturing display screen in early 2007.  Motorola is placing their green mark in a few other ways – like the cordless home phone above, featuring an energy saving eco-mode and 20% recycled materials.  Motorola is also sponsoring a solar phone charging initiative for mobile subscribers in Uganda and won the MDA Green Award for a wind and solar base station set up in Nambia.

Motorola may have patented the solar panel LCD screen, but HTC was the first to manufacture a solar powered cell phone.  The phone was introduced in China in spring 2007 and includes a 1.3 megapixel camera.

While mobile leaders Samsung and Nokia perfect the PVC and BFR free components, Greener Gadget Design competitor Gert-Jan van Breugel of the Netherlands has created the greenest casing.  The Bamboo Phone features a wind-up power supply – crank for about 3 minutes and make your call.  When you’re ready to upgrade, the bioplastic and bamboo made casing can be disassembled and thrown directly in the compost bin!

8 thoughts on “Greatest Green Cell Phones for the New Year”