Change is coming to Washington. Greed is out, and Green is in!

Here are 10 of our favorite fresh new faces:

Here’s a nice change, blasting the Energy Department out of its fossilized, fossil-fuel state and into the 21st Century. Instead of an oil company exec, Obama has appointed a Nobel Prize-winning physicist with a track record in working toward energy efficiency. As Director of the Lawrence Berkeley National Laboratory, Chu gained a national reputation as a speaker; among other things, he liked to point out that companies who claimed they couldn’t possibly cut back energy use suddenly manifested miracles of efficiency when they stopped paying lobbyists and hired engineers instead.

After years of neglect, bending over backward to industry demands, and interference in basic science by political hacks, Jackson will be a breath of fresh air at the EPA. As head of New Jersey’s Department of Environmental Protection Jackson has been implementing that state’s climate plan, which aims to reduce greenhouse-gas emissions to 1990 levels by 2020. If New Jersey can do it, there’s hope for the U.S. “I can think of few people more qualified and ready to lead the EPA during these challenging times,” notes Senator Tom Carper (D-DE)

The longest-serving EPA Director in history (all of Clinton’s eight years) and a “well-known environmental wonk”, Browner brings her geeky science background to the White House, where she will head a new council to coordinate White House energy, climate and environment policies. She’s been lauded by everyone from the Audubon Society to the Center for American Progress; the conservative American Enterprise Institute, in contrast, finds her “excessively partisan”, which must come as a shock after the easy-going, non-partisan environmental policies of the Bush years.

Can you imagine a world in which the President’s science advisor publishes articles with titles like: “The Future of Climate Change Policy: The U.S.’s Last Chance to Lead”? Science was not exactly respected during the Bush years; it was more swept under the rug, then beaten with the broom. Holdren, a physicist-turned-environmental-policy-expert, is better than “change we can believe in” – he’s “change we can demonstrate with empirical proof”.  Oh – the subtitle for that article, which appeared in the October Scientific American? “McCain or Obama can end shameful U.S. foot-dragging and rally the world against climate change.”

As Deputy Mayor of Los Angeles, Sutley has been working on that sprawling city’s climate change initiatives; prior to that she worked at the EPA, the California EPA, and served as energy advisor to California Governor Gray Davis. She’s also a woman of color, born in  South America, and an open lesbian. Says Warner Chabot, CEO of the California League of Conservation Voters: “Nancy Sutley rocks!… one of the most ethical, effective environmental policy leaders in government.”

What a nice concept – a Senator who, instead of being a former business exec, is a former executive director of Portland Habitat for Humanity. As Speaker of the Oregon House, he racked up such an impressive record that the Oregon League of Conservation Voters named him “Caretaker of the Year”. He’s bringing in a plan to fight climate change by, among other things, having U.S. cities adopt some of the initiatives he pushed through in Oregon, such as investing in renewable energy and conservation.  Merkley took out incumbent Senator Gordon Smith, whose League of Conservation Voters score of 37 percent was much improved by an election-year conversion that might not have lasted had he been re-elected. Ironically, Smith was the black-as-dirty-coal sheep of the generally very green Udall family – cousins Mark (D-CO) and Tom (D-NM) are newly-minted senators themselves, with Mark a former director of Colorado Outward Bound.

A familiar face in Upstate New York, Tonko brings a solid progressive vote to this solidly Democratic district (a nice change after years of hawkishness under Sam Stratton and moderateness under Michael McNulty). Tonko is an engineer, spent years in the NY State Legislature, and then was head of the New York Energy Development Authority. 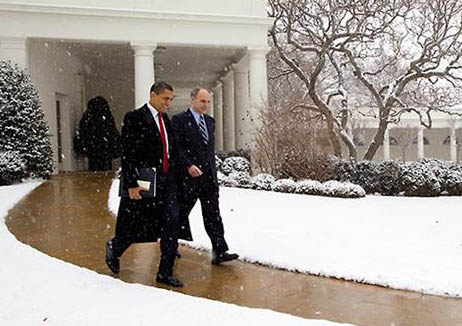 Phil Shiliro, Assistant to the President for Legislative Affairs

You probably haven’t heard of him, and probably don’t even know his job exists – there are no YouTube videos, or even a pic of him on the White House website [update – they’ve finally got one up!]. But he’s the guy that schmoozes with the Congress, making sure that Democratic lawmakers (and maybe even a Republican or two, you never know) are on board so that legislation gets passed. Effective liaison was one of the big failures of the Clinton White House, and Obama is already making smarter choices – Shiliro is a former chief of staff to Henry Waxman (more on him in a moment) with nearly 30 years of Capital Hill experience. An environmental lawyer, he joined Waxman’s staff in 1982 to work on the Clean Air Act.

Not exactly a new face, but probably the most significant change in Congress this year. Henry Waxman booted John Dingell (D-GM) from the chairmanship of the House Energy and Commerce Committee, where he had been single-handedly holding up, slowing down and sabotaging any legislation that Detroit automakers didn’t like. Waxman, in contrast, has been the go-to guy on just about all things green: He wrote the Safe Climate Act (which may now be able to pass); he also wrote the Global Warming Statement of Principals and got 152 House members to sign on. He’s also been a key defender of the Clean Air Act and the Safe Drinking Water Act. (Likely key player in helping Waxman oust Dingell: Phil Shiliro)

Not a new face again, but a pleasant surprise – a green face we didn’t expect would stick around. McNerney is a wind power executive (!) and two years ago he knocked off one of the most anti-green Congressman, the scandal-plagued Richard Pombo. McNerney walked cautiously during his first term, thinking he would only be able to hang on in this solidly Republican district as a blue-dog moderate Democrat. But he won re-election over a rock-ribbed conservative, and it looks like he’s here to stay.